Check out the abstract submission format here: Email us your abstracts today; be part of the biggest event in obstetrics and gynecology.

The Ethiopian Society of Obstetricians and Gynecologists (ESOG) would like to extend its heartily new year wishes to its esteemed members, partners, staff and all Ethiopians. We wish you a happier and more successful new year.

In our collaborative project with ACOG, we are happy to announce that all members of the Ethiopian Society of Obstetricians and Gynecologists (ESOG) will have a status of being associate members of the American College of Obstetrics and Gynecology (ACOG).  There shall be exciting privileges including in the associate membership of ACOG for our ESOG members such as online access of:

Stay tuned to ESOG website and check your e-mail accounts frequently for the announcements for the start day of the associate membership and the privileges.

Subject: Dr. Tedros Adhanom’s Endorsement for the Position of Director General of WHO

It is time for the real Health-for-All

Ever since His Excellency Dr. Tedros Adhanom announced his bid to head the World Health Organization (WHO) in Geneva, Switzerland on May 24, 2016, ESOG has been showing a relentless support to what could be a historic decision by one of the most successful personalities in the Ethiopian health sector. From an official endorsement published on our official website on June 27, 2016, to an exclusive coverage on our June newsletter, we have worked to bring weight to the matter.

Our pleasure in the news of Dr. Tedros’ bid is not without reasons. As the oldest partner in the Ethiopian health sector that has worked under his guidance and leadership, our Society has been on the forefront to witness a man who has all the knowledge, skills and thoughts at his disposal to get things done.

From laying the foundation for the most successful interventions at the Federal Ministry of Health to taking health services closer to the most rural areas of Ethiopia through health extensions; to maintaining successful communication with all the partners and players in the sector; Dr. Tedros had introduced a number of health system reforms which significantly improved access to health services in general and that of the maternal, women and newborn health in particular.

Some of the most outstanding achievements were, among others, the training and deployment of over 38,000 Health Extension Workers (HEWs) who were instrumental to reform the primary health care delivery system.

When given to Dr. Tedros, the Women Deliver Award for Perseverance at the fourth Women Deliver International Conference held in Copenhagen, Denmark on May 16-19, 2016 proved to be one of the most deserved awards in the international health arena.

No one knows better about truly believing in and living the notion of providing Health for All. That is the kind of person WHO can use at this point in time- a man who will make it his personal business to provide quality health for all the inhabitants of the world regardless of the remote locations, race, economic performance, gender or age.

We believe he is the right man to head WHO for all the right reasons. As a man from the third world, not only does Dr. Tedros know the biggest challenges of health at an international level, but he also knows how to effectively respond to them.

As he said when launching his bid, “Shutting down airports, canceling flights and holding people hostage in quarantines is not an effective way of addressing epidemics.” We believe he has a better way forward.

We at ESOG are not only proud of his achievements so far, but are confident of the healthier world he could bring us should he lead WHO. We once again confirm our firm stand as we stand by one of the most practically successful man we have known in the health sector.

It is time for the real Health-for-All

A Memorandum of Understanding (MoU) was signed between American College of Obstetricians and Gynecologists (ACOG) and Ethiopian Society of Obstetricians and Gynecologists (ESOG) on June 30, 2016 in Washington DC. The MoU is signed to kick off ACOG/ESOG collaborative project to enhance medical education and residency training in Obstetrics and Gynecology in Ethiopia. Representing the two parties were Dr Dereje Negussie, president of ESOG and Dr Thomas M. Cellhaus, president of ACOG. 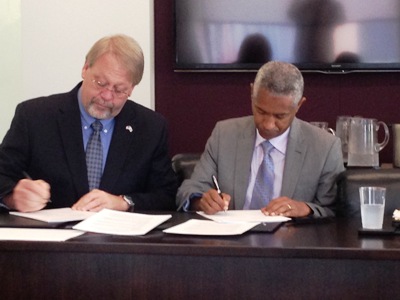