The Ethiopian Society of Obstetricians and Gynecologists (ESOG’s) PMTCT Project has finalized a basic Prevention of Mother to Child Transmission of HIV (PMTCT) training focusing on Option B+ today Thursday, Novembers 19, 2015. 29 health care providers working both in Addis Ababa and regional target facilities have participated on the training. Started on November 12, 2015, the training took place at Kasanchis Nigist Towers Building, 3rd floor, where the Society’s Project Office is located. 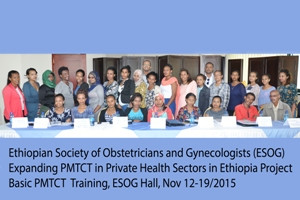 Training on Care for Survivors of Sexual Assault Conducted

Training on care for survivors of sexual violence was conducted from September 16-18, 2015 in Addis Ababa. In the training 22 health care providers from 15 public hospitals: nurses, midwives, general practitioners and obstetricians and gynecologists were trained. The Sexual Assault Clinical Outreach Project is its last year of phase two of the project implementation.

It is funded by the Royal Netherlands Embassy through UNFPA. UNFPA is the lead UN agency for delivering a world where every pregnancy is wanted, every birth is safe, and every young person's potential is fulfilled.

The Ethiopian Society of Obstetricians and Gynecologists (ESOG) has participated on the International Federation of Gynecology and Obstetrics (FIGO) 21st World Congress, which was held in Vancouver, Canada from 4 to 9, October, 2015. Thirty five members of ESOG participated on the Congress, where ESOG hosted a session entitled- The State of Maternal Health in Ethiopia.

The scientific program of the congress was very significant in that world class speakers took part and shared their knowledge and experiences. In addition, the congress was also an opportunity for ESOG to conduct sideline meetings with representatives from the African Federation of Obstetrics and Gynecology (AFOG) and other stakeholders.

Please read the Abstract of the session below.

The State of Maternal Health in Ethiopia

This is prepared to show the world the efforts of the people and government of Ethiopia towards reducing maternal morbidity and mortality.

Ethiopia has a population of about 90,096,012, with annual population growth rate of 2.4Pct. The total of fertility rate in 2014 is 4.1Pct with a drop from 5.5Pct in 2000, out of the annual expected pregnancies of about 3 million. The modern contraceptive prevalence rate has increased dramatically from 6Pct in 2000 to 40Pct in 2014. This is mainly due to task sharing of family planning service to health extension workers to provide short term and long acting reversible contraceptives (Implanon) at the community level with backup support from health centers. Abortion related deaths have also showed significant drop from its contribution to maternal mortality of around 32-54Pct prior to 2005 to 4-6Pct from a 2014 study after Ethiopia introduced a progressive abortion law in 2006.

According to the successive demographic health survey findings, the skilled birth attendance rate has increased from 5Pct in 2005 to 15Pct in 2014. Innovative approaches for human resource for health shortage in the rural setting have been addressed through task sharing of surgical skills to emergency surgical officers. The number of obstetrics and gynecology residency training universities has also increased from one in 2005 to eight in 2015 with a plan to produce up to 300 OB-GYNs in a year by 2020.