The Ethiopian Society of Obstetricians and Gynecologists (ESOG) in collaboration with the American College of Obstetricians and Gynecologists (ACOG), FMoH, FMoE, Universities, HERQA and funded by Center for International Reproductive Health Training (CIRHT) is engaged in an effort to improve the quality of medical education and residency training for obstetrician-gynecologists in Ethiopia and is working on four interrelated objectives among which one is the standardization of the residency program examination across all the universities and certification of residents.

The examination and Certification committee of ESOG-ACOG Collaboration Project engaged in the undertaking of the standardization of the national examination is involved in the capacity building of faculty to acquire a strong exam item preparation, skill and knowledge, creation of a standard and secure exam item bank and administration of certification examinations across all the ob-gyn residency programs in Ethiopia.

To this end ESOG examination and certification committee in collaboration with the FMoH have planned to conduct an in-service examination to all ob-gyn specialty training residents to assess the level of residents across the country, evaluate the programs and ultimately create a standard national evaluation method in the future.
This is therefore to kindly request all the ob-gyn specialty training residents in the following universities to register online to be able to sit for the central electronic examination to be held from May 30 - 31, 2018 parallel to the residency matching exam.

We appreciate your understanding
ESOG in collaboration with the FMoH

On the occassion of the 26th Annual Conference of the Ethiopian Society of Obstetricians and Gynecologists (ESOG) has recognized HE Dr. Kebede Worku, state minister of health, for his leadership in Sexual and Reproductive Health and his support to the Society.

Outgoing Board Handed Over Responsibility

Following an election of new Executive Board members on a business meeting conducted during the 26th Annual Conference of the Ethiopian Society of Obstetricians and Gynecologists (ESOG) on February 6, 2018, the outgoing board handed over its responsibility to the incoming board members. The hand over took place at ESOG’s project bureau on February 21, 2018.

According to the election results, Dr. Delayehu Bekele replaced Dr. Dereje Negussie as the president of ESOG. Dr. Mekdes Daba will serve as the Executive Board’s Honorary Secretary. Dr. Munir Kassa, Dr. Malede Birara and Dr. Fikremelekot Temesgen are elected members. Members who were reelected to serve one more term:  Dr. Mahlet Yigeremu will be serving as the vice president while Dr. Shiferaw Negash will remain a member of the Executive Board.

ESOG has a long-standing culture well stipulated in its constitution that Executive Board members cannot serve any more than four years of two terms. 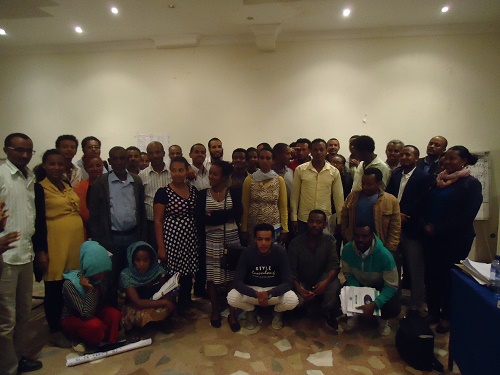 The trainings have been administered by one of the projects currently running under ESOG in collaboration with the Federal Ministry of Health (FMoH) entitled- Implementing Quality Improvement (QI) in Reproductive Health (RH): Family Planning (FP) and Comprehensive Abortion Care (CAC) in Selected Hospitals and Health Centers of Amhara and Oromia, Ethiopia and De-stigmatization of Safe abortion among Health Care Workers in Ethiopia.

After they were introduced to the concept of QI, participants were being trained on how to develop a problem statement, aim statement, change idea, measure of improvement, testing and improving sustaining and spreading change.

In trainings that have been full of activities, participants had an opportunity to pick a problem in their respective health centers and develop a project that will be implemented and bring about change. Through a series of mentorship supports that will follow, the projects that have been developed during the trainings will be fully implemented in the facilities to a point of witnessing credible change in that particular area of concern. The experience drawn from the trainings regarding developing projects and implementing change ideas is expected to be part of the continuous planning in facilities eventually leading to quality improvement in services.

Funded by David and Lucile Packard Foundation, the project has the objective of implementing integrated national QI in RH: CAC and FP among 60 health facilities in Amhara and Oromia Regional States. To that end the project also aims at selecting hospitals for the support on QI on CAC and FP; providing orientation training about mentoring and quality improvement to 16 Health Care Workers (HCWs) that serve as mentors (Midwives and obstetricians), the HCWs should have a training on family planning and CAC and conducting baseline assessment on quality of care among the selected health facilities. 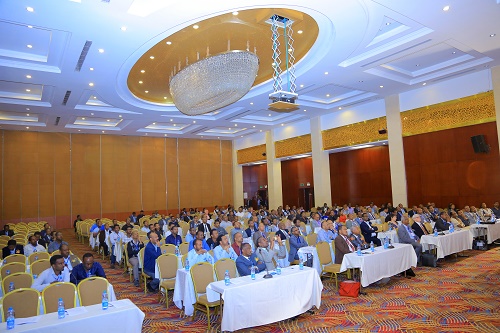 The Ethiopian Society of Obstetricians and Gynecologists (ESOG) conducted its 26th Annual Conference at Intercontinental Hotel, Addis Ababa on February 6-7, 2018. The event started with a series of preconference CMEs and Hands-on Training, which were conducted on February 4, 2018 at Black Lion Hospital, St. Paul’s Millennium Hospital Medical College and the Ethiopian Public Health Institute (EPHI).

The conference was themed- Ensuring Access and Quality of Safe Surgery in Obstetrics and Gynecology Practice in Ethiopia. Opened by H.E. Dr. Kebede Worku, state minster of health, the conference brought together members, Ob-Gyn professionals from all over the world and local and international partners. The highlight of the event, among others, was the launching of an independent website for the Ethiopian Journal of Reproductive Health (EJRH), ESOG’s scientific publication. EJRH has been boosted through a collaborative project among ESOG, the American College of Obstetricians and Gynecologists (ACOG) and the Center for International Reproductive Health Training (CIRHT).