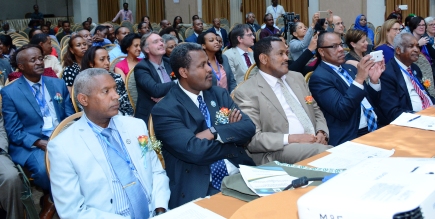 Themed- SDGS: Challenges and Opportunities for RH in Africa, the event brought together hundreds of gynecologists, obstetricians and other health professionals from Ethiopia, Africa and beyond. Dignitaries include Dr. Kebede Worku, state minster for the Federal Ministry of Health, Dr. Dereje Negussie, president of ESOG, Professor Ladapo A. Ladipo, president of AFOG, Dr. Yirgu G.Hiwot, officer for the International Federation of Obstetrics and Gynecology (FIGO), Dr. Heywood Brown, president elect for the American College of Obstetricians and Gynecologists (ACOG), among others.

During on the opening ceremony a Life Time Achievement Award was also handed out to two members of ESOG. Dr. Yirgu and Professor Lukman Yusuf received the awards for their lifelong contributions in obstetrics and gynecology both in their professional careers and their participations in dozens of studies.

A new song that celebrates the achievements of ESOG in maternal and children’s health was also made public during the opening ceremony.

The panel on the theme of the event brought to the stage Dr. Yirgu, Professor. Ladapo and Dr. Azmach Hadush of the World Health Organization (WHO), to share views on the national, continental and global perspectives of SDGs. Chaired by Professor Lukman the presentations were followed by discussions.

The event was concluded with success on Saturday February 4, 2017.