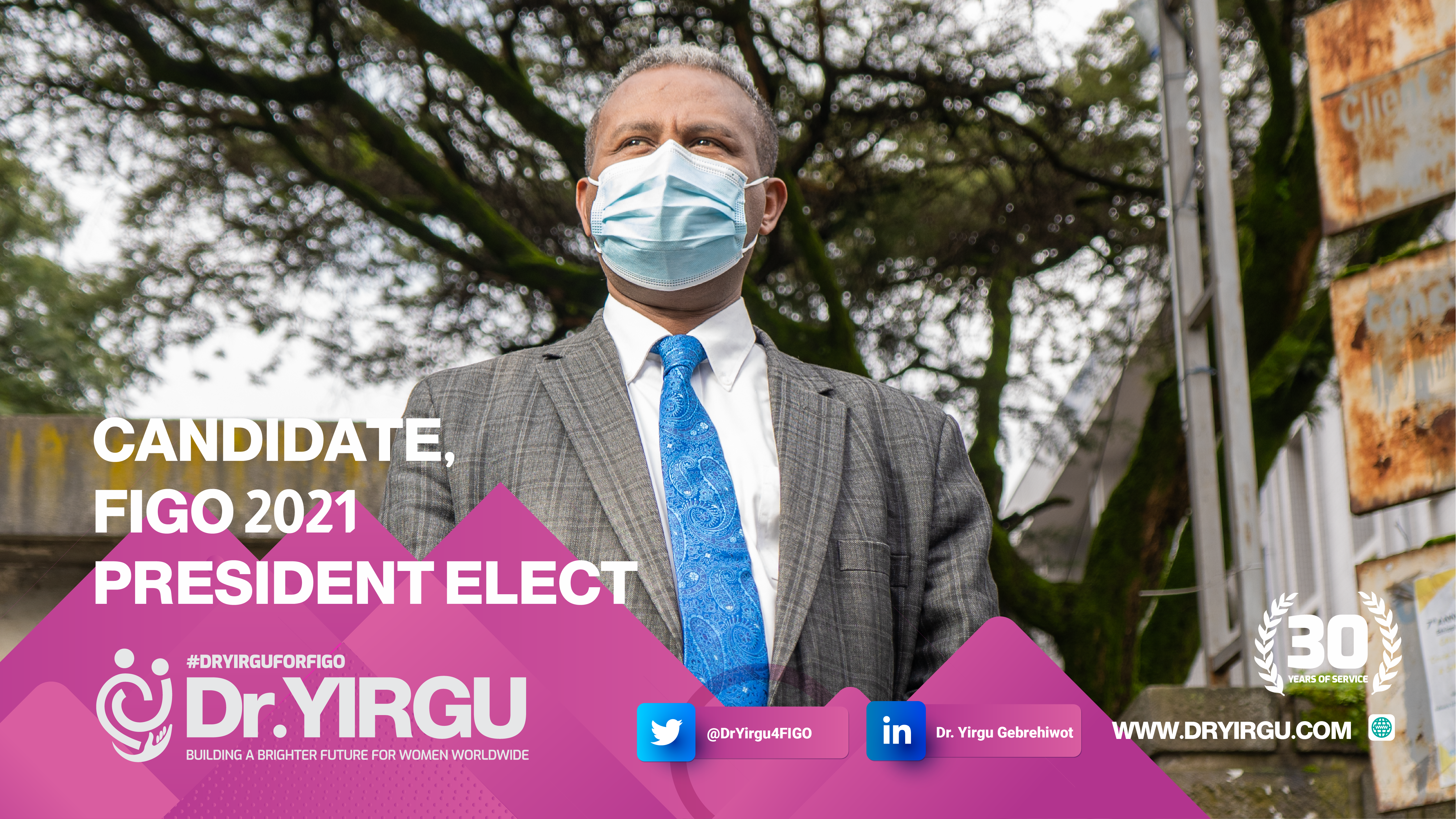 Dr. Yirgu was ESOG’s President for two terms between 2010-2013, when he has helped in strengthening it to become Africa’s financially and structurally strong professional association. Serving as the President of one of the oldest professional associations in Ethiopia- the Ethiopian Medical Association (EMA) between 2007-2009, he made an immense contribution in building the capacity of the organization.

Currently as a Director of Clinical Services at Black Lion Hospital, one of the premier health facilities in Ethiopia, he along with his colleagues is successfully sustaining the institution’s health services while venting the surge of COVID within operating on a very limited resource.

The rate of maternal mortality caused specifically by unsafe abortion has been slashed in Ethiopia. That is mainly due to a revised law that paved a way for the provision of safe abortion services. Dr. Yirgu has played a leading role in the process of having the law revised, which in turn changed many women’s lives.

He also led the first initiative to start a sexual assault survivor's clinic in Ethiopia. The initiative then was replicated by a number of University Hospitals, where he also led in the development of management and development of guidelines. Dr. Yirgu has published dozens of original researches in peer-reviewed journals earning him the title of Associate Professor. He has contributed to National Guidelines on Family Planning, a Technical and Procedural Guideline on Safe Abortion Services and a National Management Guideline on Selected Obstetrics and Gynecology topics.

Dr. Yirgu’s experience beyond the borders of Ethiopia is well evidenced in his service as the first and founding president of the African Federation of Obstetrics and Gynecology (AFOG). As AFOG’s President, Dr. Yirgu has laid all the necessary foundational works and successfully overseen the first and second annual meetings of the federation.

Dr. Yirgu has served as an Officer of FIGO between 2016 and 2019. As an officer, he had a unique opportunity to know FIGO and had the chance to work with NCD, fistula and safe abortion working groups. He has represented FIGO on regional meetings to increase its visibility and show the proximity of FIGO to member countries. He was an executive board member for FIGO between 2013-2016 and helped formulate a strategic plan for FIGO’s vision for the following five years and signed a Memorandum of Understanding with ‘Direct Relief’, for the provision of operating kits to doctors for surgery training, free of charge, for a fistula project, which benefited women with fistula.

Dr. Yirgu was one of the recipients of FIGO’s Projects, where he successfully led FIGO- LOGIC and FIGO SRHR Projects with a national outreach and impact.  Dr. Yirgu had collaborated with world renowned institutions such as WHO HQ, WHO Africa and IPAS & Gutmacher Institute on various issues and made contributions in CEmONC training and MDSR project.

The election for the FIGO President Elect will be conducted on a meeting that will be held virtually via the Zoom platform on Wednesday 27th October and Thursday 28th October 2021 from 12.30 to 16.00 UTC+1 (UK time), in accordance with FIGO’s Articles of Association, on the occasion of FIGO’s XXIII World Congress.