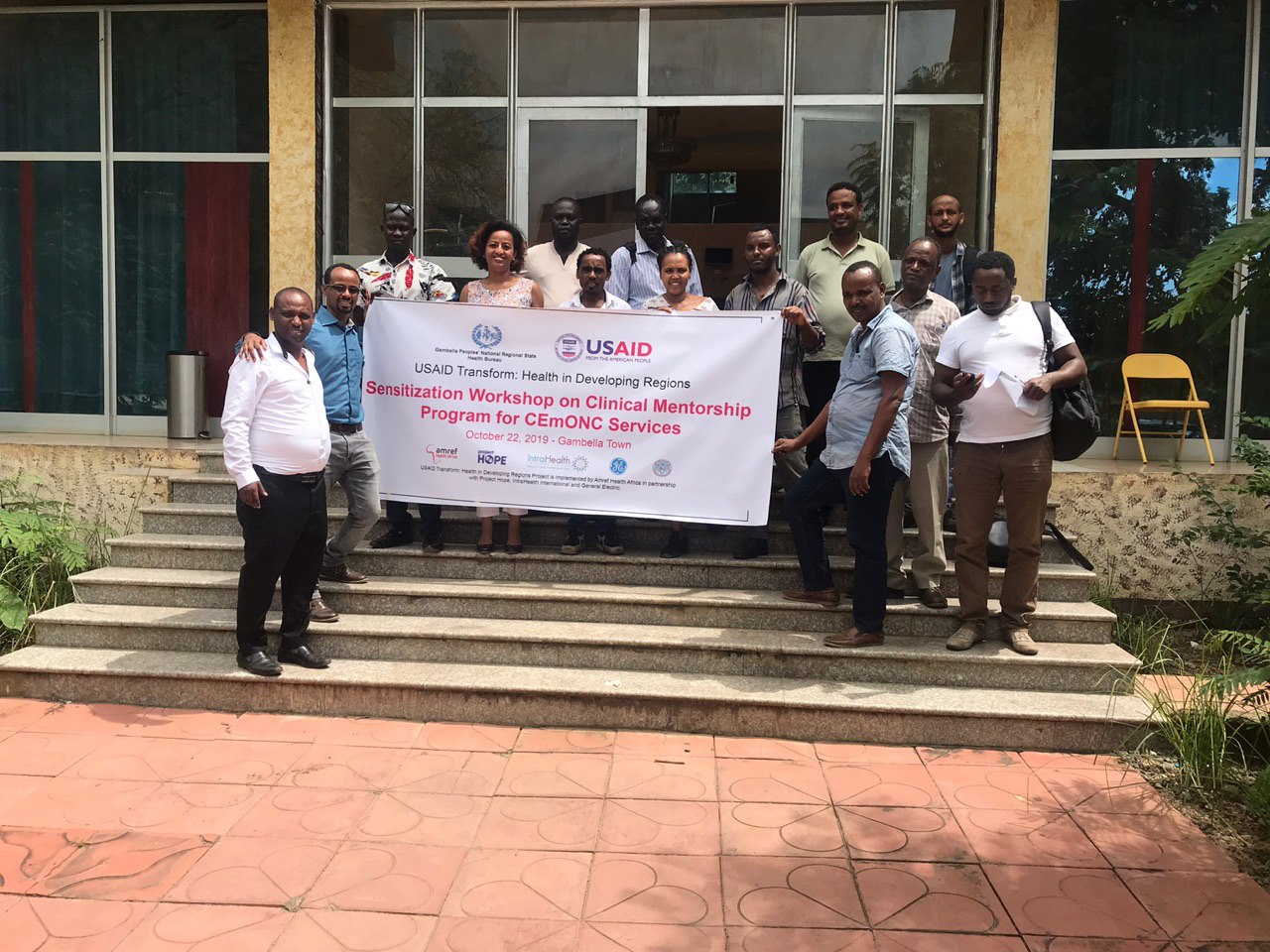 Sensitization workshop for clinical mentorship program on Comprehensive Emergency, Obstetric and Newborn Care (CEmONC) service was conducted in Assossa, Beninshangul Gumuz Region and Gambella, Gambella Region. The workshops were conducted on October 19 and October 22, 2019. Similar workshops are expected to take place in Jigjiga os Somali Regional and Semera of the Afar Regional State.

The workshop was attended by Dr. Mekdes Daba, principal investigator, and Dr. Yenealem Tadesse, from Project Hope, USAID Transform HDR On the workshop results of clinical mentorship assessment was presented and discussion was made among participants from the regional health bureaus, Assossa General hospital, Bullen and Wenbera primary hospitals CEO, Medical Director, MCH heads and ESO, and zonal health departments.

Indicating the results of the assessment were very reflective of the reality on the ground, participants asked questions and discussed their shortcomings. The shortages of supplies, blood bank, a commitment of sustainability of support, training opportunities, among others were concerns raised by participants.

The program is undertaken in the four developing regions of Ethiopia.

The Ethiopian Society of Obstetricians and Gynecologists (ESOG) is accredited as a legitimate CME Provider. Having met all the national standards set by the Federal Ministry of Health, the accreditation was issued by the Ethiopian Midwives Association. The accreditation will allow ESOG to provide credited CMEs for members.

ESOG is also in the process to be recognized as an accreditor, which will allow it to accredit other institutions as providers. 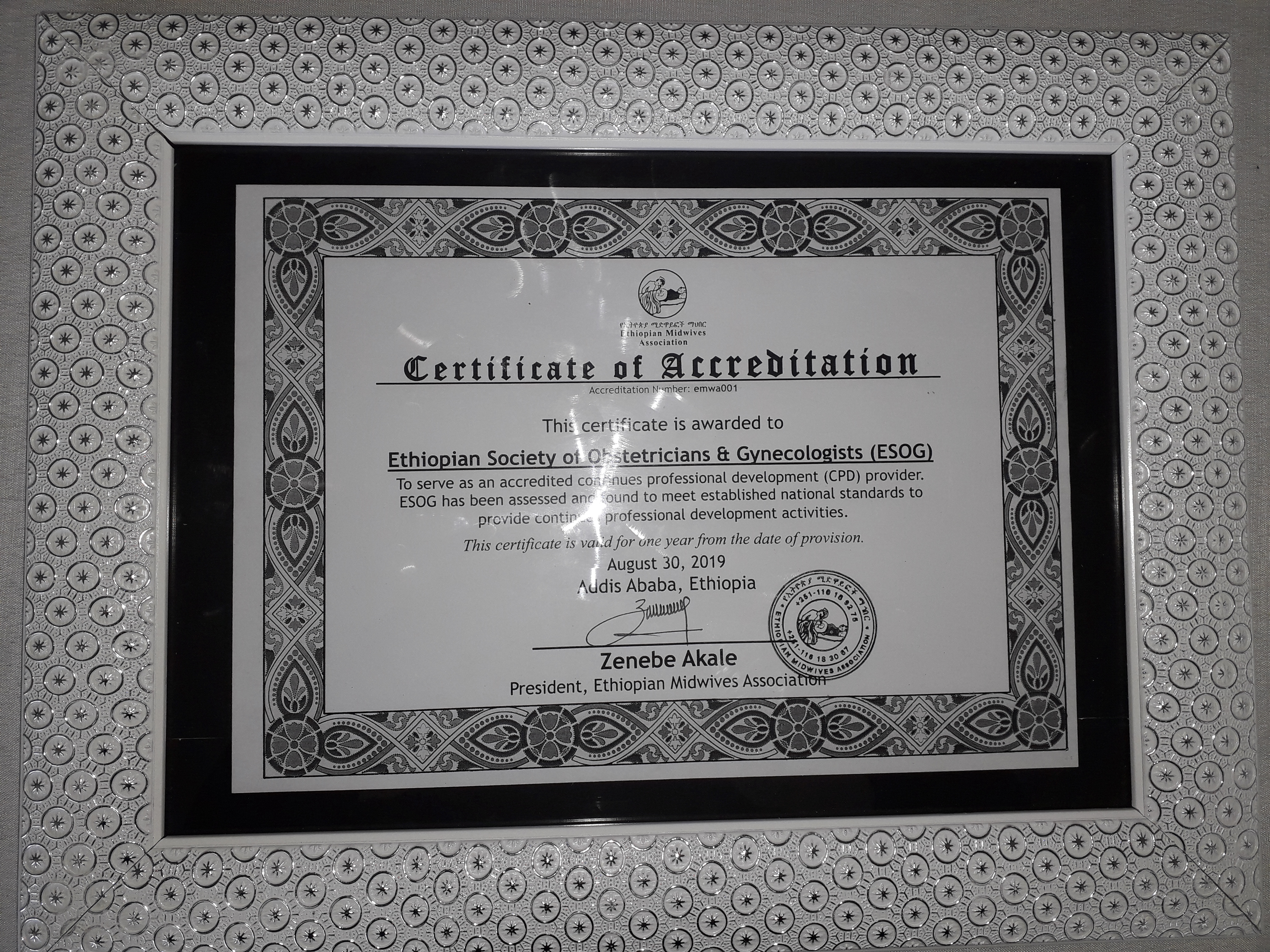 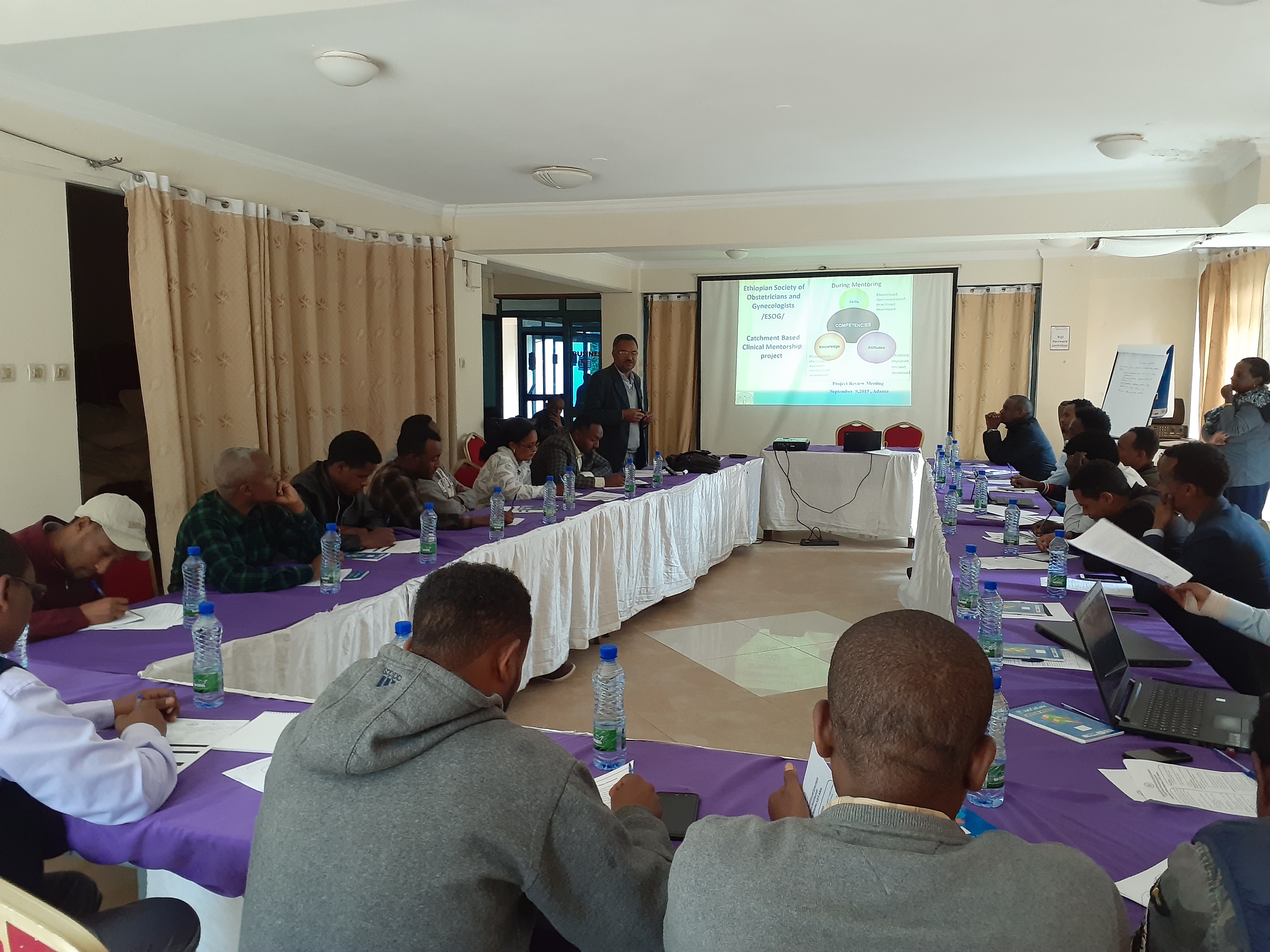 Both presenters present a very clean compound that brought praises to all Primary Hospitals and competitive theoretical knowledge of health professionals have been documented as encouraging aspect in the primary hospitals. Documentation, inadequate practical skills and shortage of equipment, supplies and poor infrastructure need further work, the mentors noted. The presentations were well accompanied by discussions. Representatives of the Federal Ministry of Health, Amhara Health Bureau, Oromia Health Bureau, Zone Health Office and Dr. Delyeheu Bekele and Dr .Malede Birara from ESOG executive board well all present on the meetings respectively .

The goal of the mentorship program is to improve the quality of RMNCH services through skill and knowledge transfer that will ultimately lead to a decrease in maternal, newborn and child morbidity and mortality.

The project aims to involve 2 zones: 2 referral and 6 primary hospitals in each of the regions: Amhara and Oromia. Supported by the Federal Ministry of Health (FMoH) and in collaboration with the regional health bureaus, the project envisions to benefit a total of 650 health workers, who are the direct beneficiaries, and indirect beneficiaries of more than 250, 000 women of reproductive age groups. 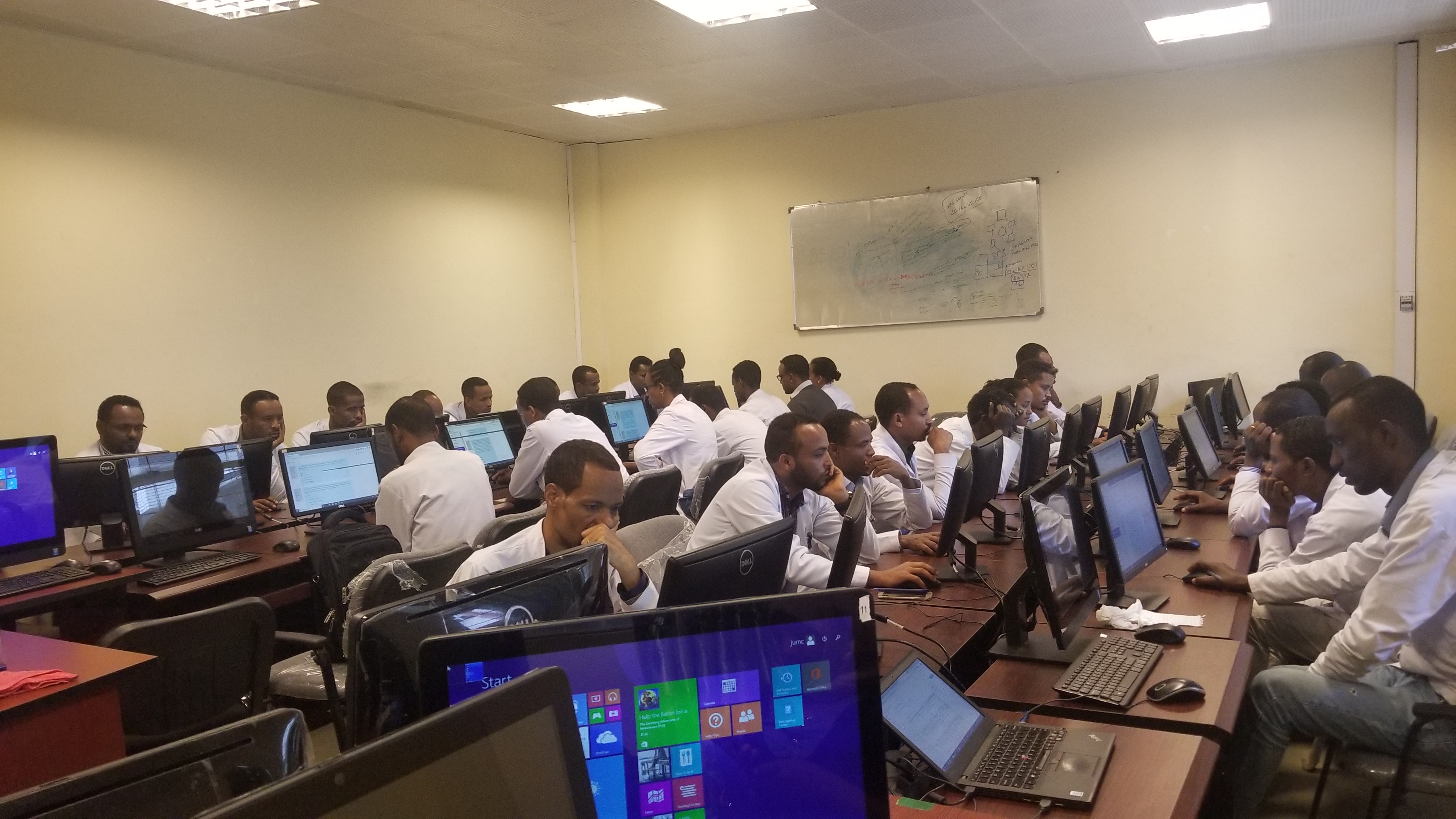 The Ethiopian Society of Obstetricians and Gynecologists (ESOG) conducted a series of examinations to residency students in 12 institutions on September 4-5, 2019. The examinations were planned by the residency thematic area of the ESOG-CIRHT Collaborative Project and administered by faculty members from the institutions, with technical support from IT professional from the Federal Ministry of Health (FMoH).

ESOG in collaboration the Federal Ministry of Education (FMoE), Universities, HERQA and funded by Center for International Reproductive Health Training (CIRHT) has been engaged in an effort to improve the quality of medical education and residency training for obstetrician-gynecologists in Ethiopia and is working on four interrelated objectives among which one is the standardization of the residency program examination across all the universities and certification of residents.

The Examination and Certification committee of ESOG-CIRHT Collaboration Project engaged in the undertaking of the standardization of the national examination is involved in the capacity building of faculty to acquire a strong exam item preparation, skill and knowledge, creation of a standard and secure exam item bank and administration of certification examinations across all the ob-gyn residency programs in Ethiopia. 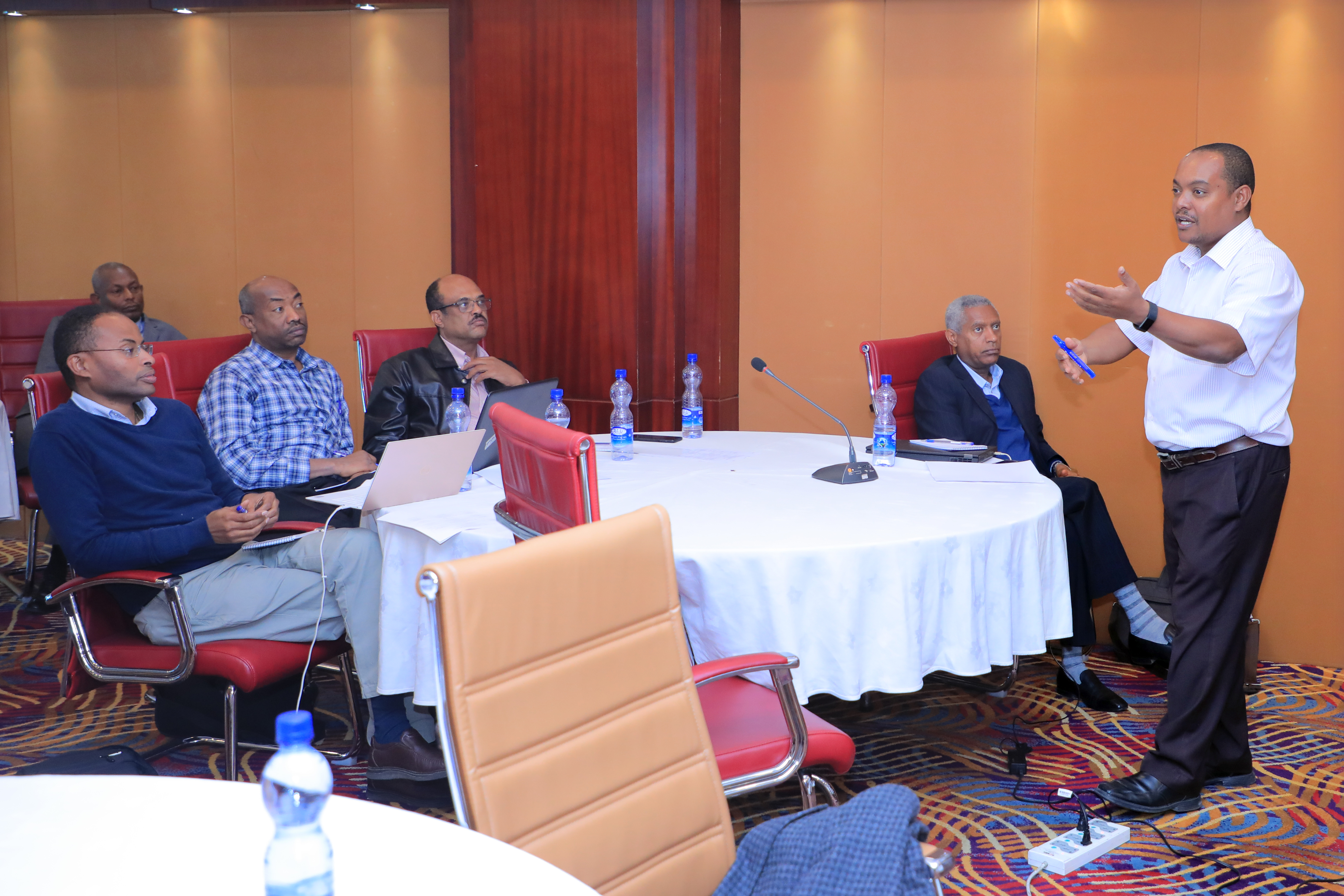 The training was planned as a preparation to set up ESOG’s Institutional Review Board (IRB). Selected from the trainees and approved by the Executive Board, some of the participants will be part of the to-be set up IRB.

Once established the IRB is expected to ease the burden of researchers on sexual and reproductive health (SRH) by reviewing research methodologies and issuing ethical approvals. Currently ESOG members and other researchers on SRH go to a whole lot of various institutions to get such an approval.

The trainers were Dr. Getnet Yimer and Yohannes Sitotaw from the National Ethics Review Committee and Dr. Solomon Kumbi, a senior member of ESOG and an expert on medical ethics and one of the professionals who prepared the current national research ethics guideline.