Participation: the total number of Ethiopians who participated in around 30, which is 0.27% of the total participants. Given the fact that Ethiopia takes a 1.41% share of the global population, we are underrepresented in this conference. The proportionate number should have been at least 153 participants from Ethiopia.

Cancer:  as a major challenge for developing countries: although cervical cancer remains to be a major challenge for Ethiopia and the other developing countries, it has been seen that the other gynecologic malignancies are on the rise. The health system is ill prepared for provision of cancer care and it has been pointed out that, prevention activities for cervical cancer should still be our priority. Preparation for advanced cancer care was also highly recommended.

Obesity: as an emerging challenge that is following the changes in the socio-demographics of the population including the westernization of the life style of Urban women in Africa (sedentary life style, unhealthy feeding practices), obesity is destined to be a major burden. Given the fact that it is related to more than 195 health problems, the call for action was loud and clear.

ANC: anti-natal care, remains to be critical in detecting both maternal and child health issues in a timely fashion. The need for increasing the frequency of visits from 4 to 8 has been underlined. It has been pointed that the current status of ANC follow-up in Ethiopia hasn’t even made it to the previous recommendation of 4, adequately. 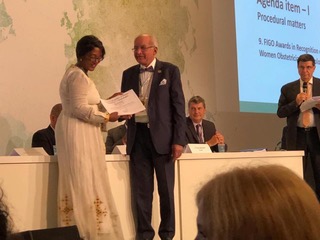